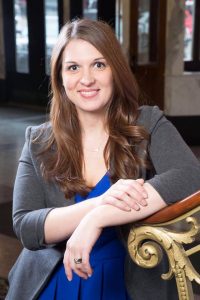 Allison Weiland has been promoted by the Sioux Falls State Theatre Company to executive director. She had been working full time since April 2017 as the nonprofit organization’s development coordinator.

“Allison has done a great job since we initially hired her more than a year and a half ago. She has exceeded Board members’ expectations in every area of responsibility,” Board President John Swedeen said. “She’s gained valuable experience in the past year and is highly qualified to serve as the executive director. The community is fortunate to have her.”

After her college experience, she spent about five years in Minneapolis, where she worked for companies as a product coordinator, digital product manager and account executive.

Her husband, David Mercer, is a music teacher. The couple has a 3-year-old daughter.

Weiland’s duties include assisting the State Theatre Company in its quest to restore and reopen the historic State Theatre at 316 S. Philips Ave. in downtown Sioux Falls.

“I’m really excited about the future of the State Theatre. It’s going to be an amazing addition to Sioux Falls,” she said.

The State Theatre, which was built in 1926, is a downtown landmark. It closed in 1990 and slid into a state of disrepair. However, the beautiful building is being restored and is on a path to reopen as a multi-purpose facility for movies, performances and other public uses. The infrastructure of the theatre has been rebuilt, and restoration work has shifted to the interior of the building.

An opening date has not been scheduled yet. The pace of renovation work is tied to the pace of fundraising.

For more information about the past and future of the State Theatre, see www.SiouxFallsStateTheatre.org.