By Allison Weiland
Posted March 12, 2020
In Blog posts
ARTISTRY IN THE DETAILS: The Work of Conrad Schmitt Studios2020-03-122020-03-12https://siouxfallsstatetheatre.org/wp-content/uploads/2020/11/state-theatre-state-black-with-white_png.pngState Theatrehttps://siouxfallsstatetheatre.org/wp-content/uploads/2020/11/state-theatre-state-black-with-white_png.png200px200px
2

Movie-goers in Sioux Falls are going to be impressed with the interior of the State Theatre, and not just by the advanced audio-visual equipment, comfortable recliners and new carpeting that will be installed in coming months.

The artwork on the walls of the auditorium will really stand out when plaster work and painting are finished. The area is a construction zone right now, but every little brush stroke is a significant step toward the restoration of the first floor of the historic State Theatre. 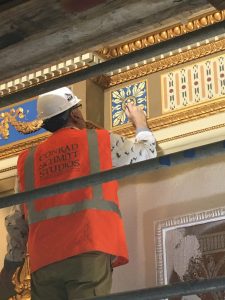 “It’s going to be breathtaking when that scaffolding comes down. I don’t think people have seen anything like this in Sioux Falls,” said Rick Statz, national project director for Conrad Schmitt Studios Inc. “It’s just going to be a spectacular, intimate theatre space.”

Conrad Schmitt Studios is the highly specialized and highly regarded subcontracting company responsible for restoring the decorative plaster and original coloring that helped make the State Theatre a community treasure.

Employees of Wisconsin-based Conrad Schmitt Studios work on beautiful churches, theatres, libraries and other public spaces across the nation. They are familiar with Sioux Falls, however. Employees of the company also have worked on restoration projects at the Cathedral of Saint Joseph and at the Calvary Episcopal Cathedral. They also have worked on the Capitol in Pierre. 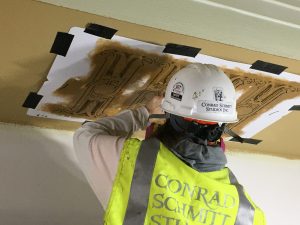 The company typically has three or four people working at the theatre. Their part of the restoration work is expected to take about four months. They started in mid-November. The theatre, which closed in 1991, is expected to reopen in mid-2020. The exact date has not been determined.

McClendon is beginning his fourth year with Conrad Schmitt, but he has been in the business of decorative painting for about 35 years.

Working on the building with Journey, other subcontractors and State Theatre Company leaders has been a pleasure, and work has gone well, McClendon said. 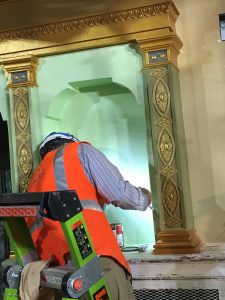 Restoring the State is an artistic processes. An expert with Conrad Schmitt had to carefully remove eight to 10 layers of paint from some test patches to determine the original color of sections of wall. Tools such as stencils are created to help recapture original designs.

When the theatre was built in the 1920s, green and gold were the dominant colors, with red and blue accents, McClendon said. He and his crew are trying to capture the grandeur of the building in a historically correct way, he said.

“It’s been a really good project,” he said. “It will definitely be one of the high points of the downtown.”