Norberg Paints has been in business in Sioux Falls since 1885. That’s four years longer than South Dakota has been a state. With its rich history and its status as one of the oldest businesses in the region, Norberg Paints is a fitting supplier for the restoration of the historic State Theatre.

Norberg is donating paint for the big project, which is well underway.

The paint store wanted give back to the community that has kept the business operating for 135 years.  Contributing to help restore a longtime downtown landmark seemed fitting, said Stuart Norberg, co-owner and co-manager of Norberg Paints 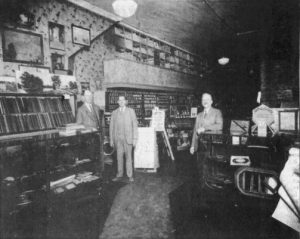 “We’re part of Sioux Falls and the history of Sioux Falls. This is something I think it’s good for us to be part of,” said Norberg, a fourth-generation descendent of the store’s original owners. “We like to invest in projects that are going to be here long term.”

Dan Boyle is the other co-owner and co-manager. He is a fifth-generation descendent of the store’s founding partners.

Norberg Paints has roots that trace back to 1882, after Swedish immigrants Sven Albert Norberg and his brother, Peter Norberg, started working as painters in Sioux Falls. Within a few years, they opened their own business.

Today, Norberg Paints operates two stores in Sioux Falls: one at 326 E. 14th St. and one at 313 W. 37th St. It is one of the oldest family-owned businesses in the state. 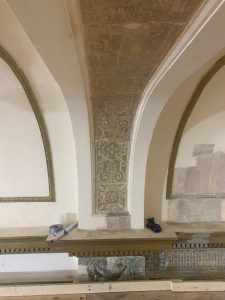 State Theatre Ceiling Before and After 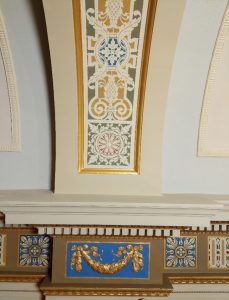 The present owners of the store got interested in assisting with the restoration of the State after philanthropist T. Denny Sanford and the city of Sioux Falls stepped up and made substantial contributions to the restoration project.

The State opened in grand style in 1926 and closed unceremoniously in 1991. The magnificent building gradually deteriorated, until community leaders helped save it. For about the past 15 years, the nonprofit Sioux Falls State Theatre Company has led efforts to preserve and restore the downtown gem.

The main floor of the theatre is expected to reopen sometime in mid-2020 as a luxury movie house that will be open to the public. Fundraising to restore the second- and third-floor of the theatre will continue until the entire building is operational again.

Meanwhile, Norberg Paints is providing high-quality paint for the restoration of the first-floor auditorium area. Wisconsin-based Conrad Schmitt Studios, a highly specialized subcontracting company, is responsible for restoring decorative plaster and original coloring to the interior of the building.

The project also appears to be progressing very nicely, he said. “It will be cool when it’s done,” he said.

Donating supplies is just one of the ways that community residents are getting involved in the project. As the restoration advances and the Theatre gets closer to reopening, there will be an increasing need for volunteers, for example.  For more information about opportunities, see the “Volunteer” link on the home page of the Theatre’s website.