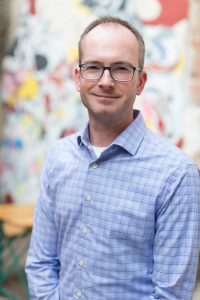 Steven is the new General Manager at the State Theatre.

The State Theatre Company is thrilled to have Dahlmeier in the newly created position, Executive Director Allison Weiland said.

“This is a big position because we’re starting a new business. To have someone with Steven’s resume’ and his experience with business, nonprofits, the downtown community, even planning and film, is ideal. He checks all the boxes,” Weiland said. “It’s another huge step towards the opening of the State Theatre.”

The historic Theatre opened in 1926. With the exception of a few special events, it has been closed since 1991. The first floor of the State is undergoing extensive renovation work. The downtown landmark is on track to reopen in mid-2020 as a luxury movie house, Weiland said. Fundraising continues so that the second and third levels of the building also can be restored.

Dahlmeier worked the last four and a half years at the downtown advocacy organization Downtown Sioux Falls (DTSF), initially as event manager and more recently as program director. He also has prior experience as a staff assistant to U.S. Sen. Tim Johnson, food pantry manager for Feeding South Dakota, and development director for Sioux Falls Jazz & Blues.

Joe Batcheller, president of DTSF, said losing Dahlmeier is bittersweet. “You hate to lose someone as gifted, talented, and dedicated as Steven. But as a Board member for the State Theatre, it’s also reassuring knowing we’ve got someone coming on staff who will do a phenomenal Job of setting the State Theatre on the right trajectory,” said Batcheller, who is entering his fourth year on the State Theatre Board.

Dahlmeier’s responsibilities at DTSF included assisting with a variety of events held at the State Theatre, including coordinating feature films, meetings and press conferences. Now he looks forward to helping the majestic structure re-establish itself as the Crown Jewell of downtown Sioux Falls, he said.

He will report to Weiland and to the Executive Committee of the State Theatre.

Dahlmeier, 38, is a native of Flandreau, S.D. and a graduate of Dakota State University. His wife, Sarah, is a florist. They have two girls, ages 7 and 10.

Weiland said one more full-time position is likely to be added to the State Theatre staff prior to the reopening. The Theatre also will depend heavily on part-time employees and volunteers to operate, she said.

For more information about the State Theatre, see SiouxFallsStateTheatre.org.