The Iowa native could have lived anywhere after she wrapped up her impressive career with IBM in Rochester, Minn. The State Theatre and other historic preservation causes in the community are fortunate that she chose Sioux Falls. 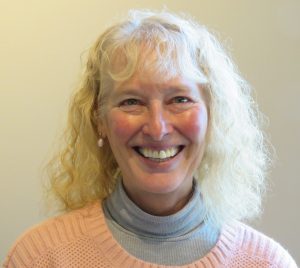 Olson has become one of the State Theatre’s most dedicated, energetic and dependable volunteers. She does everything from cleaning rooms and cataloging artifacts to assisting with events. She often works with Stacy Newcomb-Weiland, a Sioux Falls businesswoman and longtime Theatre volunteer and leader who has played important roles in saving the building.

Olson’s passion for helping restore the State to its original grandeur is greatly appreciated by the Theatre’s staff and Board members.

She picked Sioux Falls to be her post-retirement home after researching options. Although she likes the city’s proximity to Sioux City, where some of her family members live, there wasn’t a strong personal attraction pulling to Sioux Falls. But she liked South Dakota’s tax climate, for example, and she cherished  the city’s Midwestern values, including how the community values people and its interest in historic preservation. 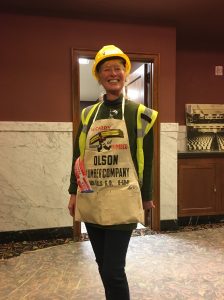 She retired young in 2014. After figuring out where she wanted to live, she purchased and restored a house in Sioux Falls’ Historic District. Then she started getting involved with organizations such as the Minnehaha County Historical Society. One day during a stop at her downtown hairdresser’s shop, she noticed the State Theatre, got intrigued with the restoration project and started volunteering.

Olson enjoys meeting people with similar historic interests. That includes hearing the recollections of people who grew up going to movies or other events at the State.

Restoring the Theatre is creating a new and meaningful chapter in local history for new as well as older generations of residents, she said.

“The Theatre was just incredibly majestic, just beautiful,” she said. “It showed us what we can do, what we can become. Restoring it to its original grandeur will welcome a whole new generation and give them another way to grow and help reach their potential. It shows all of us that possibilities are only limited by our imagination.” 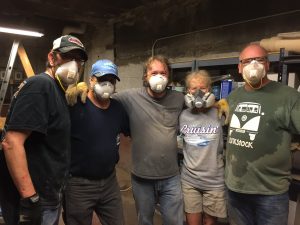 The State Theatre opened grandly in 1926 and closed unceremoniously in 1990. The magnificent building steadily deteriorated until civic leaders and volunteers stepped up and saved it. For about the past 15 years, the nonprofit Sioux Falls State Theatre Company has been leading efforts to raise money to restore the downtown treasure.

The main floor of the Theatre is expected to reopen on an as-yet unscheduled date in 2020, while fundraising and work to restore the second and third floors of the building continue.

Volunteers like Olson and people with other interests and motivations will be needed in the future, especially after the Theatre reopens as a beautiful movie house for the public.

Olson and State Theater leaders encourage others to consider volunteering. To find out more about coming opportunities, see the “Volunteer” link in the upper right corner on the home page of our website https://siouxfallsstatetheatre.org/volunteer/.