By Allison Weiland
Posted June 10, 2020
In Blog posts
A VOLUNTEER WITH A SPECIAL CONNECTION TO THE STATE THEATRE2020-06-102020-06-11https://siouxfallsstatetheatre.org/wp-content/uploads/2020/11/state-theatre-state-black-with-white_png.pngState Theatrehttps://siouxfallsstatetheatre.org/wp-content/uploads/2020/11/state-theatre-state-black-with-white_png.png200px200px
2

Anyone who attended movies in Sioux Falls between 1956 and 2011 probably bought a ticket from Arlene Kosberg. During that span, she worked at several different movie houses in the city, including the State Theatre. 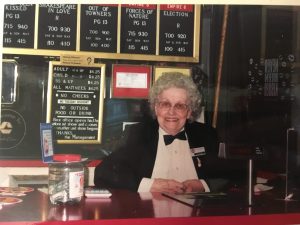 Arlene was 74 years old when this photo was taken of her at the Empire 6 theatre in 1999. She would not retire for at least another 10 years.

Kosberg occasionally carried titles such as assistant manager, but she always worked up front, greeting movie-goers and selling them tickets. But in the case of her grandson, Chad Barker, and a few of her other young relatives, she just invited them inside.

Barker went to a lot of movies – some of them multiple times – while he was growing up. He doesn’t recall paying for one until he was about 15. Now 40, he’s extremely grateful for the appreciation of movies and old theatre buildings that his late grandmother gave him. 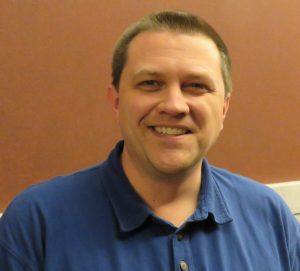 He credits his fond memories of going to movies and his grandmother for motivating him to become a valuable volunteer for the State Theatre, which is being restored to its original splendor and is on track to, once again, become a public movie house.

“As soon as they put out a call for volunteers, I said, ‘yes, I want to help’,” said Barker, whose regular job is working as an information security engineer for Sanford Health. His wife, Nicole, also volunteers for the community. She donates time to the Old Courthouse Museum.

At the State Theatre, Barker serves as a tour guide for visitors during First Fridays and other special downtown events when the historic building is open for public review. He has also helped behind the scenes with cleaning and anything else that needs to be done at the State. But leading highly informative tours of the Theatre has become his specialty. 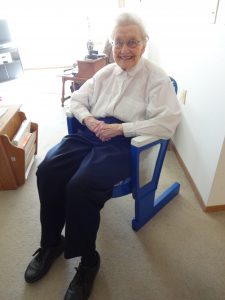 Arlene sitting in a State Theatre seat refurbished by her Grandson, Chad.

Barker has many memories of attending movies at the State as a young boy with his brother and cousins. His recollections are more about the experience and the buildings than specific movies, though, he said. As a youth, he dreamed of someday becoming a projectionist, a job that digital technology has since rendered largely obsolete.

He looks forward to the State reopening and plans to keep volunteering then. “I think it will be cool to finally have this old place open again,” he said.

The State originally opened in grand style in 1926 to showcase vaudeville performances and silent films. It transitioned soon after to talking pictures and had a great run as the city’s premier movie house. Public entertainment tastes changed, however, and for several years the downtown area struggled. The State slipped into disrepair and closed rather quietly in 1991.

The magnificent building deteriorated until volunteers and civic leaders stepped up to save it.  For the past 15 years, the nonprofit Sioux Falls State Theatre Company has led efforts to raise money to restore the downtown treasure.

Efforts have succeeded to the point that the main floor of the State will reopen for public access on a yet-to-be-scheduled date in the fall of 2020. Fundraising and restoration work will continue after the initial reopening so that the second and third floors of the historic building also can be reopened.

Lots of volunteers will be needed to keep the Theatre running after it reopens, according to Executive Director Allison Weiland and General Manger Steven Dahlmeier of the State Theatre staff. To make yourself available or learn more about future volunteering opportunities, please visit our website https://siouxfallsstatetheatre.org/volunteer/